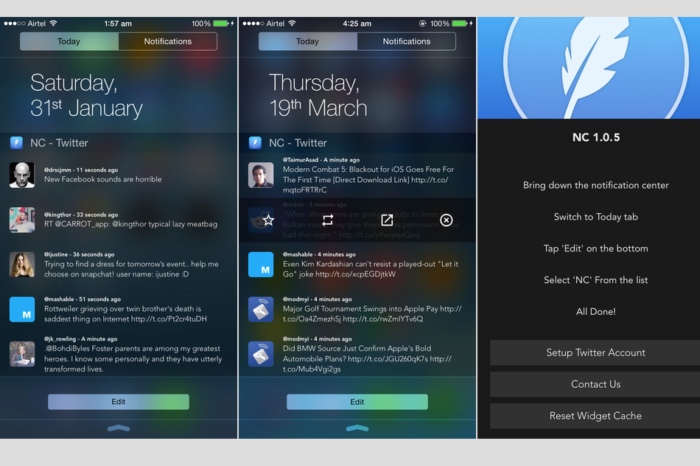 iPhone users have the tendency to customize their phones’ interface, hence a widespread liking for Cydia tweaks. Though these changes they desire are quite achievable via amazing tweaks, they in turn have to pay the price of jailbreaking their iPads and iPhones.

Now iPhone users can be rest assured of tweeting right from their Notification Center without the obligation of having to jailbreak their phones or iPads. There aren’t many apps that can allow users to do this. However, NC is just the perfect app to do so that helps you to add Twitter widget to your Notification Center. This will thus allow you to check out your Twitter Timeline as well as mentions right from your Notification Centre itself. Well, let’s learn more about the NC Twitter Widget.

Swipe to Read the Latest Tweets

Twitter’s never-ending waterfall of news can be totally random and an array of spurious comments, i.e. you cannot possibly keep up with every developing story and update. The NC Twitter Widget for Notification Centre 1.1 does not stop the flow of the news and updates but it does a better job at letting you quickly view the latest tweets quickly. The NC Twitter Widget is an iOS 8 Notification Center item, meaning that you can view your Twitter at any time by just swiping down from the top of your screen.

You do not get to see much on NC Twitter Widget: just a typical four to five tweets on an iPhone 6 screen. This is, however, enough to just get a quick idea of what’s going on. Better still, you can choose to show only those tweets that mention you, making the four or five tweets a good update of what is going on in your Twitter World.

Being a Notification Center widget, the NC Twitter Widget has to be enabled the first time you use it by swiping it down, then selecting the edit option at the foot of the screen. However, you have to now decide whether or not you want those four or five tweets to fill your screen or you want to scroll down as well as swipe as you read the tweets. When you put the widget at the top, you get to see your tweets immediately; if you place it any other place on your screen, you have to scroll down while swiping to read your tweets.

Whenever you choose to put your widget, every time you have a tweet, you can tap on it to give you various twitter functions: you can mark the tweet as a favorite, you can retweet it, or you can even choose to open the tweet on Twitterrific or in your Twitter app.

The NC Twitter Widget for Notification Center will require your iPhone or iPad to have iOS 8.0 or later. You can get the app for around $1 – $2.

Who does this App Suit?

The NC Twitter widget is very suitable for casual Twitter users or rather those people who need their tweets close at hand’.

Who it doesn’t Suit

This app will not work quite for heavy duty Twitter users and/or users using multiple accounts.

While there may be many Notification Center widgets available on App Store with varying abilities, NC is a notch higher mostly by letting you use your Twitter much more conveniently.

Many Notification Center widgets available on App Store with varying abilities, NC is a notch higher mostly by letting you use your Twitter much more conveniently.