The Truth about Metaverse Technology 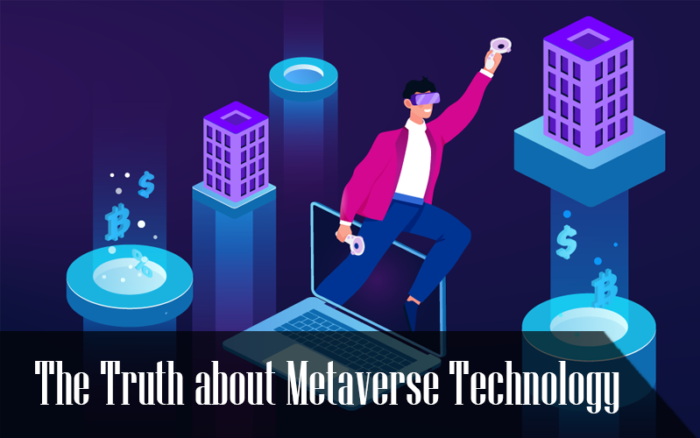 Metaverse technology is a new concept that has recently emerged in light of the fact that virtual events have become an indispensable part of our lives. It gained popularity after Facebook, the social media giant, announced that it would change its name to Meta and focus on developing its Metaverse. People began to study and research the Metaverse and its infinite possibilities at that time. Now that the term “Metaverse” has become popular among the general public, particularly among young people, we believe it is necessary to address the advantages.

The Benefits of the Metaverse

In 2020, the world began to face the adversities of the Pandemic, and people began to shift online and recognize the value of remote working. All global organizations began to use online communication tools extensively, and their popularity grew. We’ve grown so accustomed to this mode that even after things have returned to normal, we’re looking forward to using it again.

It is seen that even educational institutions all over the world have adapted to the concept of distance learning in the face of in-person constraints. The pandemic, we can say, played a significant role in the popularity of these communication tools. These virtual tools are one step ahead of metaverse technology. It gives attendees an immersive experience, and they can take advantage of the 3D virtually designed environment. They can interact with their fellow attendees in the same way that they do in real life. In short, the metaverse provides attendees with an extremely immersive experience unlike any other.

Supports the Power of Blockchain

Another advantage of the metaverse is that it strengthens the power of Blockchain. Blockchain is the underlying technology that underpins digital currencies such as Bitcoin and Ether. Furthermore, Blockchain facilitates the development of NFT. The metaverse encourages NFT-based games and provides an appropriate environment for these games and blockchain environments.

The main concept of the virtual economy will become increasingly popular in the coming days. With the advancement of virtual event technology, the virtual economy will expand in the coming years. In this scenario, the metaverse serves as an exchange ground for digital assets of equal economic value. In addition, Metaverse has an advantage in introducing new activities and possibilities in both the real and virtual worlds. It encourages the widespread use of digital currency, cryptocurrency, Non-Fungible Tokens, digital currency ownership, blockchain gaming, and other financial applications.

The platforms such as Twitter, Facebook, Instagram, and others promote and are essentially limited to screen-to-screen interaction. An immersive and exceptional social media interface would allow users to interact with one another in the same way that they would in real life. A platform that makes extensive use of graphics enables face-to-face interaction with all users of content created in virtual environments.

Many have common concerns expressed by global users about this technology and its application. People are debating whether they need this cutting-edge technology that will blur the line between reality and virtuality. Along with it, there is a constant concern about whether we, as a society, are truly prepared to share a virtual space.