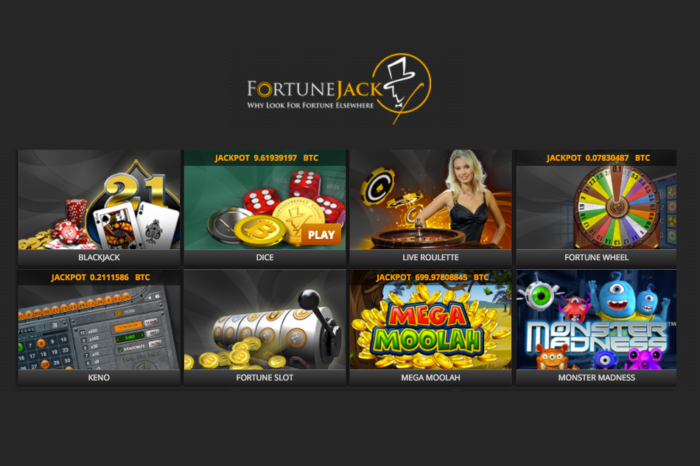 Established in 2014 and licensed in Curacao, FortuneJack has built itself up into a legitimate player in the bitcoin casino industry. With the freedoms that come along with operating as a bitcoin casino combined with a solid selection of games to choose from, there’s no surprise that FortuneJack has come such a long way in its first three years of operation.

FortuneJack boasts a massive selection of mobile casino games to choose from. They offer slots from ten different providers, forming a massive list of slots to appeal to any number of players. They also offer live roulette, blackjack, baccarat, hold’em, among other live casino games. Between those options and traditional online casino table games, as well as dice, FortuneJack has a loaded lineup of bitcoin casino games.

In terms of the FortuneJack mobile app experience, it is more than serviceable. A limited number of large buttons makes it easy to tap the options that you want to choose, without having to deal with a ton of misclicks, which is extremely important when playing casino games. A large menu on the left hand side of your screen makes it easy to get wherever you need to go on FortuneJack when you call upon it, or you can opt to access the full site from your mobile device, which is made easy as well.

For a bitcoin casino, FortuneJack has some nice promotions for its players, the most notable of which is its welcome bonus. Players receive a 130% bonus on their first deposit, good for up to 1 BTC, along with 250 free spins, which carry with them the potential to make even more in bonuses before a player risks anything from their own coffers. Players can also take advantage of a 30% bonus of up to 2 BTC for their next four deposits.

With FortuneJack being a bitcoin casino, deposits and withdrawals are as easy as you’d like. All players have to do is make a deposit to a FortuneJack bitcoin address from their bitcoin wallet, and enjoy as most deposits are processed within a miniscule time frame. Bitcoin is not subject to many government regulations that restrict gambling around the world, which allows FortuneJack to operate in countries like the United States where gambling is illegal, without any issues.

FortuneJack also has a partnership with BitGo, which allows players to make instant transactions from their BitGo wallets to FortuneJack. BitGo deposits of under 1 BTC are not subject to any fees or confirmations, while a 0.1% transaction fee applies to deposits of 1 BTC or more. This is another way that players can spend less of their funds on transaction fees, and use those funds to rack up more winnings.

In terms of support, FortuneJack is available 24 hours per day via email, as well as a contact form on their website. While you’d like to see a live chat option available, the fact that they can be reached around the clock is nice regardless of how it has to be done.

Thanks to a long list of provably fair games, as well as the freedom and flexibility offered by the bitcoin platform, FortuneJack is more than worth a look when players decide on which online casino they want to use.